COMPETITIONS AND DISCOVERIES OF APRIL 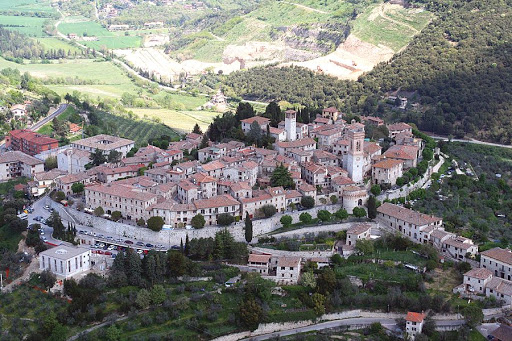 Perhaps not everyone knows this but there is a television programme that hosts an extraordinary tourist competition, this year in its eighth edition. The competition is called “Il Borgo dei Borghi 2021”, broadcast on RAI 3 as part of the TV programme Kilimangiaro: twenty villages from twenty regions challenging one another for the honour.

The Umbrian candidate chosen is Corciano, and on the evening show of 4 April, Easter Sunday, the winning borgo will be announced, the one with the greatest number of votes received in-house and from a jury of experts.

Of mediaeval origin and counted among the loveliest small towns of Italy, Corciano is one treasure after another, from the church of Santa Maria Assunta to the city walls and the 16th- Century Palazzo Municipale (Town Hall). Also worthy of mention are the Torrione di Porta Santa Maria and the Palazzo dei Priori. It even has a delightful theatre, so there are many things to see and enjoy, especially the soft, green, undulating landscape of the Umbrian hills.

As a matter of fact, whether perched among the mountains or nestled in the gentle hills, we have splendid villages here of Etruscan, Roman or mediaeval origin. For an outdoor vacation and a trip back in time, little villages such as Acquasparta in the province of Terni or Campello sul Clitunno in the province of Perugia are attractive destinations for an excursion when it is once again possible to move about. If only it could be on 25 April, the day we commemorate the liberation from Nazi-Fascism! Alas, even our times are in need of liberation!

More than likely of Roman foundation, Acquasparta began as a spa centre and in the Middle Ages, the Castello delle Terre Anolfe was constructed. Not to be missed is Palazzo Cesi which hosted the first Accademia dei Lincei (*Lincean Academy, the prestigious scientific institution of the time).

Active underground springs feed the fonti del Clitunno to which the poet Carducci dedicated a poem. In this tiny village, the Tempietto del Clitunno, a UNESCO World Heritage site, stands out.

We could have cited many more Umbrian villages but it would be useless to draw up a long list: after all, the beauty of moving about is the discoveries we make ourselves, and it just might be that April is the right month to stick our noses – and the rest of ourselves – out of the house.